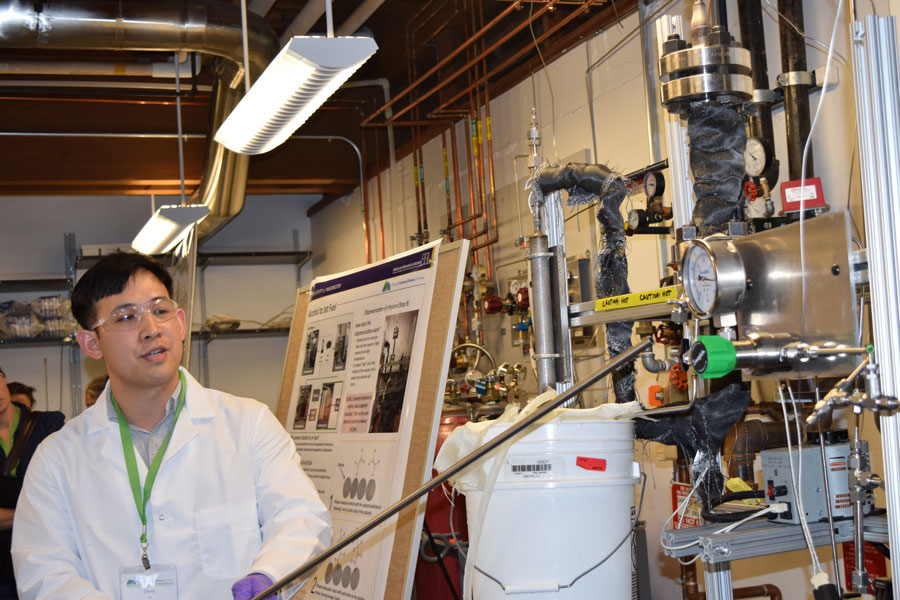 New research is identifying catalysts to produce bio-jet fuel from simple organic molecules such as ethanol. The research is being conducted by the AHB conversion team working in the University of Washington (UW) Biofuels and Bioproducts Laboratory in collaboration with ZeaChem. One of the major areas of emphasis is on synthesizing and optimizing the proper catalysts that will be used to produce bio-jet fuel at commercial scales.

What exactly is a catalyst? A catalyst facilitates a process that allows seemingly impossible chemical reactions to occur. It accomplishes this goal by lowering the activation energy of the reaction, and it does so without being consumed in the process. Catalysts are integral components to multiple processes involving difficult chemical transformations, and they can be used for extensive periods of time.

The first step uses the catalyst alumina (Al2O3) to remove oxygen and hydrogen from the ethanol to produce ethylene, a two-carbon hydrocarbon with a double bond. After removing the oxygen and some hydrogen, the remaining product is mostly ethylene gas. The next step is to couple the ethylene molecules together to form longer hydrocarbon chains.

To achieve this chemical transformation a nickel-based metal catalyst located on a support with large pores or openings is used (Fig 1). The large pore sizes allow the ethylene chain to grow without any significant size restriction.

Fundamental research in catalyst formulation and laboratory-scale testing is essential to any industrial chemical process, and the alcohol to bio-jet fuel process is no exception. Significant capital costs can be reduced by tailoring the correct catalyst to facilitate the production of hydrocarbons suitable for specific applications. In addition, long-term stability and reusability of the catalyst will be imperative in order to minimize costs. By verifying the reusability of the catalyst, we can account for the lifetime of the catalysts.

Over the next year, different catalysts consisting of metals such as titanium, chromium, and zirconium will be tested and compared with the nickel catalysts. ZeaChem will be working extensively with the researchers at UW, with the aim of producing a pilot-scale facility to produce gallons of liquid bio-jet fuel.