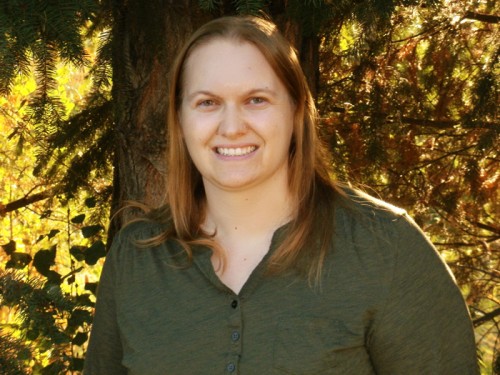 Jessica Sarauer is currently a Ph.D. student in the College of Natural Resources at the University of Idaho. Her research focuses on greenhouse gas emissions and microbial communities in forest soils. When not in the woods collecting samples, teaching forestry students, or at her desk, Jessica enjoys camping, trying new foods, reading, and playing fantasy football.

I’ve always been interested in the natural world. I grew up in Wisconsin and spent most of my childhood exploring forests, fields, and lakes. My dad is an avid hunter and fisherman (as well as a hobby farmer) so I spent most of my time outside following him around and asking tons of questions. In my freshman year of high school I joined the FFA and became interested in forestry and biology in general. From that point I knew I wanted to have a career in science, specifically in natural resources.

What are you researching?

Why should biofuels researchers think about soil?

Soils should be thought about by biofuels researchers (and everyone else for that matter!) because of the services soils provide to growing crops. Soils provide a habitat for biofuel crops to grow – including physical support, water, aeration, and nutrients. Soils are also important for other ecosystem services including water regulation, atmospheric gas modification, nutrient cycling, and carbon storage. Without soils, we wouldn’t be able to grow our bioenergy crops!

What do you enjoy most about studying soil?

I enjoy the mystery and diversity of what is living in the soil. My favorite fact about soil is that a handful of soil contains billions of organisms (from almost all phyla).

Of my many trips to AHB field sites, my favorite would have to be a fall visit to the Hayden site. As I was collecting data, a group of elk was making their way through the poplars. They were about 30 feet away and never noticed me. Charismatic megafauna are always a highlight of any field outing, especially when seen on site and not just on the drive to or from. Spiders on the other hand are not my favorite creatures to encounter, and I have a couple least favorite AHB field stories involving them!